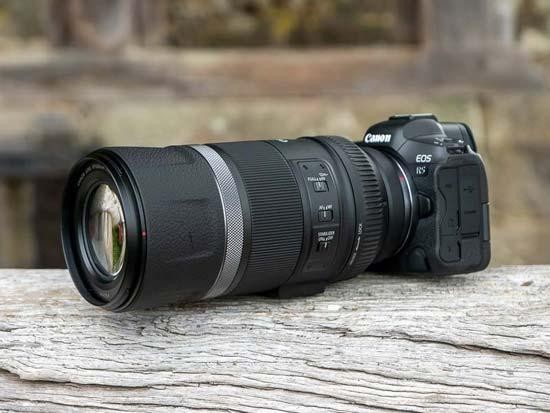 It has a fixed f/11 maximum aperture which you can’t go above or below.

The RF 600mm F11 IS STM also has a clever retractable barrel structure that makes it more portable when not in use, making it ideal for travelling (relatively) light.

Canon have also employed Diffractive Optics lens elements in the RF 600mm, which they’ve previously used before on a few DSLR lenses, principally to make them smaller and lighter than comparable lenses without any negative effect on image quality.

The combination of the lens’ fixed aperture with no diaprahgm blades means that it produces a perfectly circular bokeh, with the large focal length enabling photographers to blur the background sufficiently when photographing subjects in the distance.

It’s equipped with an optical Image Stabilizer that offers 5 stops of built-in stabilisation and it supports Dual Pixel CMOS AF when paired with a Canon EOS R System mirrorless camera.

The STM motor means that this lens offers very quiet and smooth focusing, making it excellent for both stills and video, as the lens operation noise is kept to a minimum during recording.

There’s also a configurable control ring on the lens barrel which allows you to quickly change the exposure compensation, shutter speed, aperture and ISO settings.

The RF 600mm F11 IS STM has a minimum focusing distance of 4.5m and a maximum magnification ratio of 0.14x.

Optically the lens is constructed from 10 elements in 7 groups, slightly simpler than the RF 800mm.

If the RF 800mm F11 IS STM lens that we recently reviewed is a little too long or big for you, then Canon offers the equally new RF 600mm variant.

As well as being noticeably shorter and slightly lighter, the RF 600mm also features an additonal stop of stabilisation – so 5 stops versus 4 on the RF 800mm – whilst being able to focus 1.5m closer than its bigger brother.

Given the very long focal length of 600mm that’s on offer, the RF 600mm F11 IS STM is still a surprisingly compact and lightweight lens.

It weighs in at 930g and measures 199.5mm in length when set to its “stored” retracted position, making it lighter and more compact than a comparable DSLR lens.

Rather surprisingly it doesn’t feel too unbalanced when using it with a relatively small camera like the EOS R that we tested it with, even without a battery grip fitted.

The Cano RF 600mm F11 IS STM has a rather unique retracting design to help make it more compact.

You simply twist the large knurled collar at the base of the lens from the Lock to the Unlock position, and then pull up on the barrel to extend it ready for shooting, whereupon the lens extends further by an additional 7cms to 269.5mm.

There are three switches on the left hand side of the Canon RF 600mm F11 IS STM lens.

From top to bottom, there’s a focus limiter switch with Full and 12m-Infinity settings, a switch for choosing between autofocusing and manual focusing, and a switch for turning image stabilisation on or off (there are no special stabilisation modes on this lens).

The manual focusing ring is generously sized and ridged to help you to get a firmer grip on it.

This electronically coupled ring is very smooth in use, and could perhaps do with being a bit tighter for very precise manual focusing.

There are also no hard stops at either end of the ring to help you know when the minimum or maximum focusing distance has been achieved.

In front of the manual focusing ring is the slim, silver control ring. As on most other Canon RF lenses, this can be used to control certain key camera settings (TV, AV, ISO and exposure settings).

The front third of the lens barrel is covered in a rubberized material with four prominent raised ridges, again assisting you when hand-holding the lens.

Around the base of the Canon RF 600mm F11 IS STM lens is a tripod foot. This is very useful when using the lens with a tripod to help keep it as steady as possible, something that you may want to do more often than not given the size and weight of the lens.

Unfortunately this is integrated into the lens barrel and therefore fixed in place, rather than being moveable and removable, so you can’t easily rotate the lens into the portrait position.

The large, lockable, circular lens hood (ET-88B) for helping to prevent flare is unfortunately a rather expensive optional extra, rather than being included in the box.

This large hood can be reversed and attached to the lens to make it smaller when transporting. We’d advise you to swallow the extra $55 / £58 cost and buy one.

There’s also a soft case (LZ1328) as well as front and rear caps provided in the box.

Auto-focusing with the Canon RF 600mm F11 IS STM and the EOS R camera proved to be quick, quiet and accurate for the majority of the time.

The built-in 5 stops of image stabilisation are important when hand-holding such a long lens, and the system thankfully works very well, ensuring that you can shoot at slower shutter speeds than 1/600th and still get sharp results (obviously depending on your technique).

This is especially important on the older EOS R and RP cameras, which lack the additional in-body stabilisation offered by the newer EOS R5 and R6, which therefore further enhance the RF 600mm F11 IS STM’s own stabilizer.

The lens is also very quiet, making it ideal for discreet situations, such as on safari or for birding, as well as for use while filming videos.

Focusing is internal, meaning the front element of the lens doesn’t move when focusing or zooming.

You can therefore easily use it with filters, the front thread being 82mm in size, which is a little more reasonable than the whopping 95mm size on the RF 800mm lens.

Note that despite its rugged appearance, the Canon RF 600mm F11 IS STM does not offer any form of weather-proofing or even just dust/moisture resistance, which is a real shame given its intended audience.

Chromatic aberrations, typically seen as purple or blue fringes along contrasty edges, are only conspicuous by their almost complete absence from our Canon RF 600mm F11 IS STM test shots.

With the Canon RF 600mm F11 IS STM lens set to its only aperture of f/11, there is some light fall-off in the corners which you’ll need to correct in post-processing.

Pin-cushion distortion is not at all evident.

Bokeh is a word used for the out-of-focus areas of a photograph, and is usually described in qualitative terms, such as smooth / creamy / harsh etc.

In the 600mm F11 IS STM lens, thanks to an f/11 aperture without blades, a fairly pleasant bokeh can be achieved.

We do realise, however, that bokeh evaluation is subjective, so we’ve included several examples below for your perusal.

In order to show you how sharp the Canon RF 600mm F11 IS STM lens is, we are providing 100% crops on the following page.

Although they look quite different and occupy slightly different price-points, the XS10 and XT30 actually ...