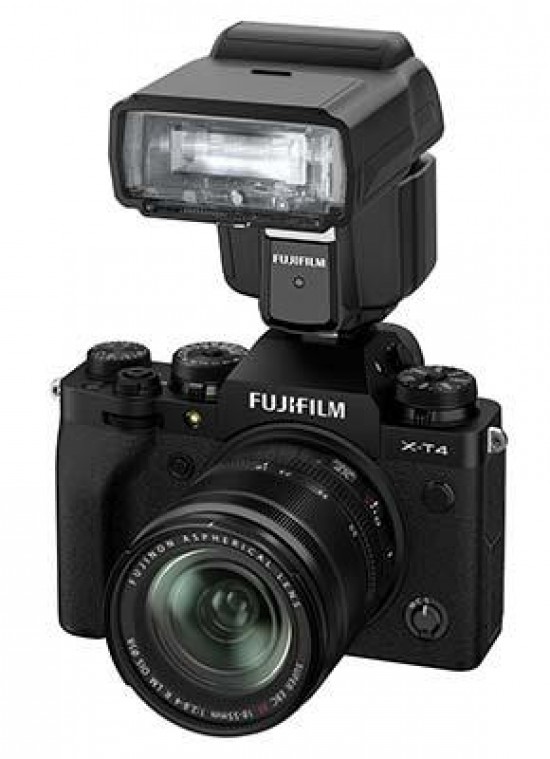 Fujifilm have unveiled a compact and high-power flashgun, the EF-60, which supports radio-controlled wireless remote triggering when combined with the new EF-W1 Wireless Commander.

FUJIFILM Corporation (President: Kenji Sukeno) is pleased to announce the launch of the shoe mount flash EF-60 (“EF-60”) and the Wireless Commander EF-W1” (“EF-W1”) on July 28, 2020, expanding the lineup of accessories for the X Series and GFX System of digital cameras.

The EF-W1 is a wireless commander that uses radio communication to control flash units. You can precisely adjust the output of multiple flash units for flexible light control, adding lighting versatility to your photographic expression.

・This shoe mount flash has a maximum Guide Number of 60 (ISO100・m and flash coverage setting at 200mm*1) despite its compact form factor.

・The flash head can be adjusted by 90 degrees upward or by 180 degrees either left or right so that flash light can be bounced off a wall or ceiling to imitate natural light and avoid harsh shadows.

・The flash coverage ranges from 24mm to 200mm*1 and can be extended to approx. 16mm*1 when the built-in diffuser is used. It also features an Auto Zoom function, which adjusts the coverage according to the angle of view of the lens being used.

・The EF-60 features TTL mode which automatically calculates the optimum exposure as well as Manual mode to allow users to adjust the output power themselves.

・The EF-60 has a built-in receiver for the wireless communications system called NAS (Nissin Air System)*2, and when combined with the Wireless Commander EF-W1, or the Nissin Air10s*3, it can be triggered remotely. This allows you to place this flash anywhere, even outdoors in bright daylight or in a location when obstacles might be blocking line-of-sight.

・The EF-60 also features the optical wireless mode. When using the FUJIFILM EF-X500 as the master unit (commander) you are able to create a stable wireless system in environments which have less than optimum radio communications.

・The EF-60 uses four AA batteries and comes with a dedicated diffuser, a mini-stand and a special carry pouch.

・ The commander and remote flash units communicate using radio control. This means remote flashes can be placed in positions far away or out of direct sight from the commander. They can even be used in bright ambient light, giving greater freedom than conventional optical communications system.

・ The EF-W1 uses NAS (Nissin Air System)*2 for radio-controlled wireless communications. This means the commander makes the X Series and GFX System of digital cameras compatible not only with the EF-60 but also with a variety of NAS-based speedlights offered by Nissin Japan Ltd*4.

・The EF-W1 allows you to control the output in 1/3EV increments in both TTL and Manual modes. When using Manual mode, the output level can be reduced as low as 1/256. This ability to fine tune the flash output gives more control, allowing the photographer to better express their creativity.

The EF-60 and EF-W1 are compatible with the following models:

There is limited compatibility with some X Series and FinePix cameras equipped with a hot shoe. Please visit https://fujifilm-x.com/support… for latest compatibility information.

*1 Equivalent in the 35mm film format

*2 NAS is a registered trademark of Nissin Japan Ltd.

*3 Nissin Air10s is a product of Nissin Japan Ltd.

Click on a thumbnail to see the full version.