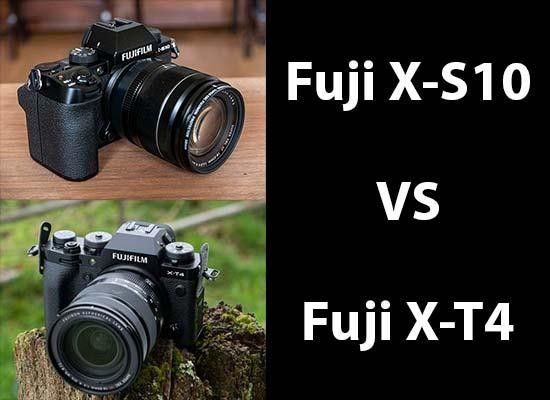 With a smaller body and simpler interface, the new X-S10 is an attempt to attract a brand new audience to Fujifilm cameras, who have been put off by the more complex design and larger size of models like the X-T4 and X-Pro3.

Although they look quite different and occupy different price-points, the XS10 and XT4 actually share a lot of similarities when it comes to their specifications and features, so much so that savvy buyers may be wondering if the newer model offers everything that they need coupled with the chance to save quite a lot of money

So we’re bringing you this in-depth Fujifilm X-S10 vs X-T4 head-to-head comparison to help you choose between the two.

The image sensor used in the X-S10 and the X-T4 is exactly the same – the very latest 26 megapixel APS-C sized BSI X-Trans sensor – which is also used by the X-Pro3.

So now Fujifilm are offering you not one, not two, but three different ways to get exactly the same high image quality.

The X-T4 offers a slightly better video mode than the X-S10.

The newer camera offers a highest quality rate of DCI 4K/30p with no crop recorded in 4:2:0 8-bit internally and 4:2:2 10-bit via the micro-HDMI port to an external recorder.

The X-T4 ups the ante by offering 4K/60p video recorded in 4:2:0 10-bit internally, so you get both faster maximum frame rate and a higher quality bit rate.

The X-S10 only supports the Long GOP compression format, whereas the X-T4 supports both Long GOP and All Intra.

One advantage that the XS10 does offer is the maximum recording time of 30 minutes, which is actually 10 minutes longer than on the X-T4.

Both cameras have the F-Log profile, 1080p/240p 10x slow-motion mode, digital image stabiliser which works in conjunction with the in-camera and lens-based systems, IS Mode Boost, different Main menu and Quick menu systems for stills and video modes, and a 3.5mm MIC socket and a USB-C to headphone adapter provided in the box.

So while pure videographers will likely choose the X-T4 for 60p 4K and 10-bit recording, the new XS10 is certainly no slouch in this department.

The new X-S10 has exactly the same hybrid autofocus system with phase detection and and contrast detections points as the X-T4 and X-Pro3.

In the Single point AF mode there are up to 425 selectable AF points arranged in a 25×17 grid. Alternatively, the camera can be set to 117 points in a 13×9 grid, and the size of the points can also be varied.

In addition to Single point AF, there’s Zone AF which allows the AF points to be selected in 3×3, 5×5 or 7×7 groups, and
Wide/Tracking AF.

The X-S10 offers a respectable 8fps continuous shooting speed when using the mechanical shutter, but the X-T4 takes things to a whole other level by being able to shoot at 15fps.

Both cameras can achieve 20fps when switching to the electronic shutter without any crop, or 30fps with a 1.25x crop applied.

The design of the body and controls is by far the main difference between the XS10 and the XT4.

The new X-S10 is much smaller and lighter than its big brother, and purposedly has a much simpler interface in order to try and make it more appealing to less experienced users.

If you’ve ever considered a Fujifilm camera but been put of by its plethora of manual controls – something that a lot of people love with a passion – then the new XS10 will certainly be more up your street.

Instead of the ISO dial, Shutter Speed dial and Exposure Compensation dial found on top of the X-T4, there’s just a customisable Function dial on the left and shooting mode dial on the right of the top of the XS10.

And the rear of the X-S10 is slightly simpler too, with the X-T4’s D-pad completely disappearing in favour of a more touchscreen reliant interface.

This reduction in the complexity of the controls means that the XS10 is much smaller than the X-T4 – 10% to be exact – and much lighter – 20% in total.

Despite this, the X-S10 still has an appealingly large handgrip that makes the camera secure to hold even one-handed.

It’s also very well-built considering that it costs substantially less than the X-T4.

An added bonus for some people is the inclusion of a built-in pop-up flash, something that the more pro-oriented XT4 doesn’t have.

The only main concession to the more aggressive price-point from a build quality point of view is the complete lack of any weather-sealing – if this is a must-have feature, then you’ll need to step-up to the X-T4.

The XS10 is the third Fujifilm camera to feature 5-axis in-body image stabilisation (IBIS), following the X-H1 and the X-T4.

The only slight negative consequence of this reduction in size is a slight reduction in the amount of stabilisation that’s on offer.

The X-T4 provides up to 6.5 shutter steps of compensation, whereas the X-S10 provides up to a maximum of 6 stops. This is still half a stop better than the 5.5 offered by the X-H1.

The X-S10 has a 2.36M-dot OLED electronic viewfinder with 0.62x magnification, 100fps refresh rate and a built-in eye sensor.

Both cameras have a fully articulating vari-angle 3-inch LCD screen.

You can flip out the screen to the side, rotate it forwards for easier operation when pointing the camera at yourself, and fold it flat against the back of the camera to stop it from getting scratched.

This free-angle design proves to be very versatile screen for vlogging, movie shooting and photography in general.

What differs between the XS10 and XT4 is the resolution of the screen – 1.04M-dots versus 1.62M-dots respectively – which gives the X-T4 the edge.

Perhaps unsurprisingly given the smaller, more compact size of the X-S10, it only has a single memory card slot, rather than the X-T4’s dual card slots.

So the location of the memory card on the XS10 is much less convenient, especially when the camera is mounted on a tripod, and the single memory card slot is less flexible and offers less peace of mind than the dual slots on the XT4.

This offers a CIPA-rated battery life of up to 325 shots on a single charge when using the LCD screen, compared with 500 for the XT4.

Both cameras can also be powered and charged via a USB-C connection, which is useful if you’re out and about and have a compatible powerbank to plug the camera into.

Commendably Fujifilm are offering the XS10 as a kit with both of those lenses, plus the cheaper XC 15-45mm F3.5-5.6 OIS PZ lens, so you actually get more choice with the XS10.

Both cameras can also be purchased body-only too.

They may look quite different, but at heart the new XS10 and the XT4 are remarkably similar in terms of their image quality and feature-set, so much so that for a lot of users the XS10 will more than meet their needs.

The user groups who should probably jump for the X-T4 are keen videographers who need 4K/60p 10-bit quality, anyone who wants to use their camera in all kinds of inclement weather conditions, sports shooters who will benefit from the 15fps burst mode, and more experienced photographers who strongly value the array of manual controls that have adorned higher-end Fujifilm X-series cameras ever since they made their debut.

Otherwise, the XS10 makes a lot of sense for a lot of people, being smaller, lighter, cheaper and simpler to use than the X-T4, whilst essentially offering the same stills image quality and only a small concession on the video side of things.

So what do you think? Would you choose the new X-S10 or the flagship X-T4? Leave a comment below!


Source link
2020-10-16
admin
Share
Previous What is WWW Resolve or Redirect?
Next AWS Free Tier: what is it and who qualifies?