How To Fix Wi-Fi Roaming

In the beginning, the Wi-Fi gods created the router. And it was good, at least for small spaces. But then the people discovered Wi-Fi dead spots and became displeased with the gods, gnashing their teeth and shaking their fists.

So the Wi-Fi gods created Wi-Fi extenders and all was good again. Until the people discovered that their devices would not always use those extenders, preferring to stay connected to their old, familar Wi-Fi router. And the people were unhappy once again, feeling their gods had tricked them.

So much for allegory. So why won’t your devices behave and connect to the extenders or access points you’ve added to your Wi-Fi network? Or the shiny and expensive new mesh Wi-Fi system you ripped and replaced your old setup with? And why, when you seek help for fixing your sticky devices, do you hear maddening stories from other people that say their devices roam perfectly well using the same router/extender/Wi-Fi system you use?

Note: This article will use access point or AP to refer to the devices creating your Wi-Fi network. This includes wireless routers, mesh nodes, Wi-Fi systems, Wi-Fi extenders, etc. In the end, they all meet the definition of an access point, i.e. a network device that enables Wi-Fi devices to connect to a wired network.

STA (station) will be used to refer to wireless client devices.

Let’s start by defining roaming. It is simply the process of moving an established Wi-Fi network association from one access point to another without losing connection. The process is illustrated in the diagram below, borrowed from Revolution Wi-Fi’s excellent article.

If the process is fast—often referred to as “seamless roaming”—the transition can be quick enough to not drop a VoIP call (typically 50-150 ms) or interrupt a video stream. 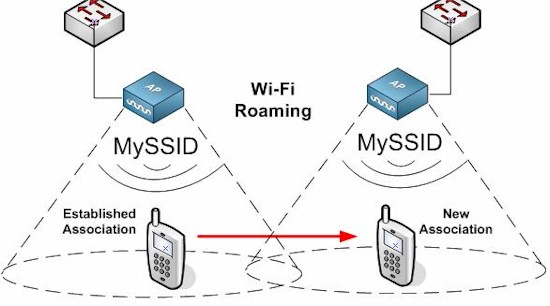 But not everyone needs “seamless” roaming. Many of us just want our devices to eventually (multiple seconds are fine) switch to the closest AP when we move from one room to another. Either way, the mechanics of roaming are the same.

The roaming process consists of four steps. Each step is initiated by the STA:

The STA is the boss when it comes to roaming, making almost all decisions about when and where to roam. But the AP can influence the roaming process through the methods below. In all cases, however, the STA makes the final decision on where to roam.


Influence is the important word here. To paraphrase an old saw, you can lead a STA to an AP, but you can’t make it connect. You can also disconnect a STA, but you can’t (or shouldn’t) make it stay disconnected. APs play hardball with witholding authentication or enforcing deauthentication at the risk of being blamed for being flaky. After all, the network was working just fine before you changed to that fancy new router, wasn’t it?

The other key concept is that 802.11k,v and r must be supported in both the AP and STA in order to be used in the roaming process. 11r support is particularly problematic, because some older STAs can’t process 11r information from APs and won’t be able to connect at all if 802.11r support is enabled.

802.11k and/or v also help minimize roaming times by doing a lot of the work the STA would normally have to do by making its own scans. But their value is more in influencing a STA’s where to roam by putting more preferable APs at the top of the lists provided to the STAs. But in the end, the STA still decides whether and how to use the information provided by the APs.

Contrary to what consumer Wi-Fi marketeers would like you to believe, Mesh Wi-Fi Systems contain no magic to smoothly guide your devices to the best connection. All the points in Devices Rule section above apply whether you are dealing with a router + extender, router + AP, mesh Wi-Fi system or multiple APs. The difference boils down to which roaming enhancement technologies are supported, where they are implented and how well they are implemented.

The only advantage a Wi-Fi system has over other ways to build a multi-AP network is that it is designed as a system. So if mesh system supports 802.11k Neighbor Reports, you can be sure all mesh points support it and reasonably sure the feature has been tested. But since 802.11k depends on STA support, there is no guarantee that your device, or mix of devices, will smoothly roam.

This doesn’t mean all Wi-Fi systems support all roaming enhancement technologies or that all implementations of the technologies operate equally well. Some products don’t support 11k,v or r while others might support only one or two standards and may throw in their own proprietary roaming “encouragement” techniques that clash with those implemented in STAs.

In the end, “your mileage may vary”… a lot, when it comes to fast, trouble-free Wi-Fi roaming. Assume nothing; check the specs! SmallNetBuilder is here to help by tracking down roaming assistance information on all tested Wi-Fi products and adding it to our Wi-Fi System and Access Point Finders. We also hope to add it to the Router Finder, at least for newer products.

It remains to be seen, however, whether manufacturers will incur the additional time and expense required for this new certification. As is typical, the first certified products are primarily reference designs. The only Wi-Fi CERTIFIED Agile Multiband products you can actually buy right now are Intel’s Wireless-AC 8265 adapter and Ruckus’ R710 Access Point and ZoneDirector 1200 Controller. Not exactly consumer stuff. And remember, you’d need certified APs and STAs to get any help from Agile Multiband.

What You Can Do

So it should be clear there are no sure solutions when it comes to trouble-free Wi-Fi roaming. But you can increase your chances of success by following these guidelines.

Don’t Roam In The First Place – Don’t assume that a multi-AP Wi-Fi system is the right solution for you. For smaller areas, upgrading your router might be a better solution than adding an extender to your existing router.

Upgrading most any N class router to any AC router will increase effective Wi-Fi coverage, even for single and dual-stream Wi-Fi devices. And if you already have an AC router, upgrading to a four-stream AC router might do the trick. This is backed up by data; many of the top-ranked routers in the Router Ranker have four-stream designs. (All testing is done with a two-stream STA.)

Use A Wi-Fi System – If you can’t get your desired Wi-Fi performance from one Wi-Fi router, switching to a Wi-Fi system is more likely to produce smooth roaming. Since they are designed with newer Wi-Fi chipsets, they are more likely to support 802.11k,v or r roaming enhancement technologies. And since they are designed as systems, all APs will support whatever roaming assistance is designed into the product.

Roaming assistance is most effective when supported on all APs in a system. This won’t be the case if you add an extender or AP to an existing router. Your old router is unlikely to support any of the newer standards and may not support band-steering either.

Building a system from all the same make/model APs can also increase your chances of smoother roaming. But, again, check the specs. Half of the APs in our recent 2×2 AP round-up have no roaming assistance features.

Don’t Overcrowd APs/mesh points – Too many APs in too small an area will almost guarantee terrible roaming behavior. Some devices will never reach a level low enough to trigger roaming. Others may bounce back and forth between APs with similar signal levels, causing connection instability. So you might not need all three mesh nodes that come in a three-pack “mesh” system. And skip the temptation to buy an Orbi three-pack unless you have a really big area to cover.

Don’t Create AP Gaps – The inverse of the previous point is also true. If there is too little or no overlap between access points, you’ll get a dropped connection. Fortunately, Wi-Fi systems are good at guiding proper mesh node placement, as are today’s Wi-Fi extenders.

The following articles and whitepapers go into lots more detail on roaming mechanics and were used in preparing this article. You don’t have to be a Wi-Fi expert to understand them, either!