How was Netflix Developed?

Netflix is one of those David vs Goliath examples from the internet world that deserves its story to be told.

The giant started as a rent-by-mail DVD service in the USA and switched to a TV streaming service that today has reached 170 million subscribers worldwide. Over the years, Netflix has changed its business model multiple times and because of that grew at a rapid pace and become one of the leaders at the TV streaming industry. Accordingly, we at Wiredelta decided to uncover the story behind the exponential growth of Netflix, how it works and the technology that it uses.

Netflix was established in 1997 by two founders – Marc Randolph and Reed Hastings in Scotts Valley, California. The idea behind was to offer a rent-by-mail DVD service as charging per rental. The rentals were around $4 plus a postage charge of $2. The users were able to keep the DVDs as long as they wanted, however, they could rent a new movie only when the old one was returned back.

A year later, Netflix introduced the first DVD website – Netflix.com, which gave customers the opportunity to buy and rent a variety of movies online.

In 1999, Netflix — still a small company compared to the incumbent Blockbuster — changed its business model to a subscription-based service renting out movies. In the following year, Netflix launched a personalized recommendation system, which selects and offers the most appropriate movies for each customer. By April, the same year, the video library of Netflix grew to 3100 titles, a competitive offering when compared to arch-enemy Blockbuster. 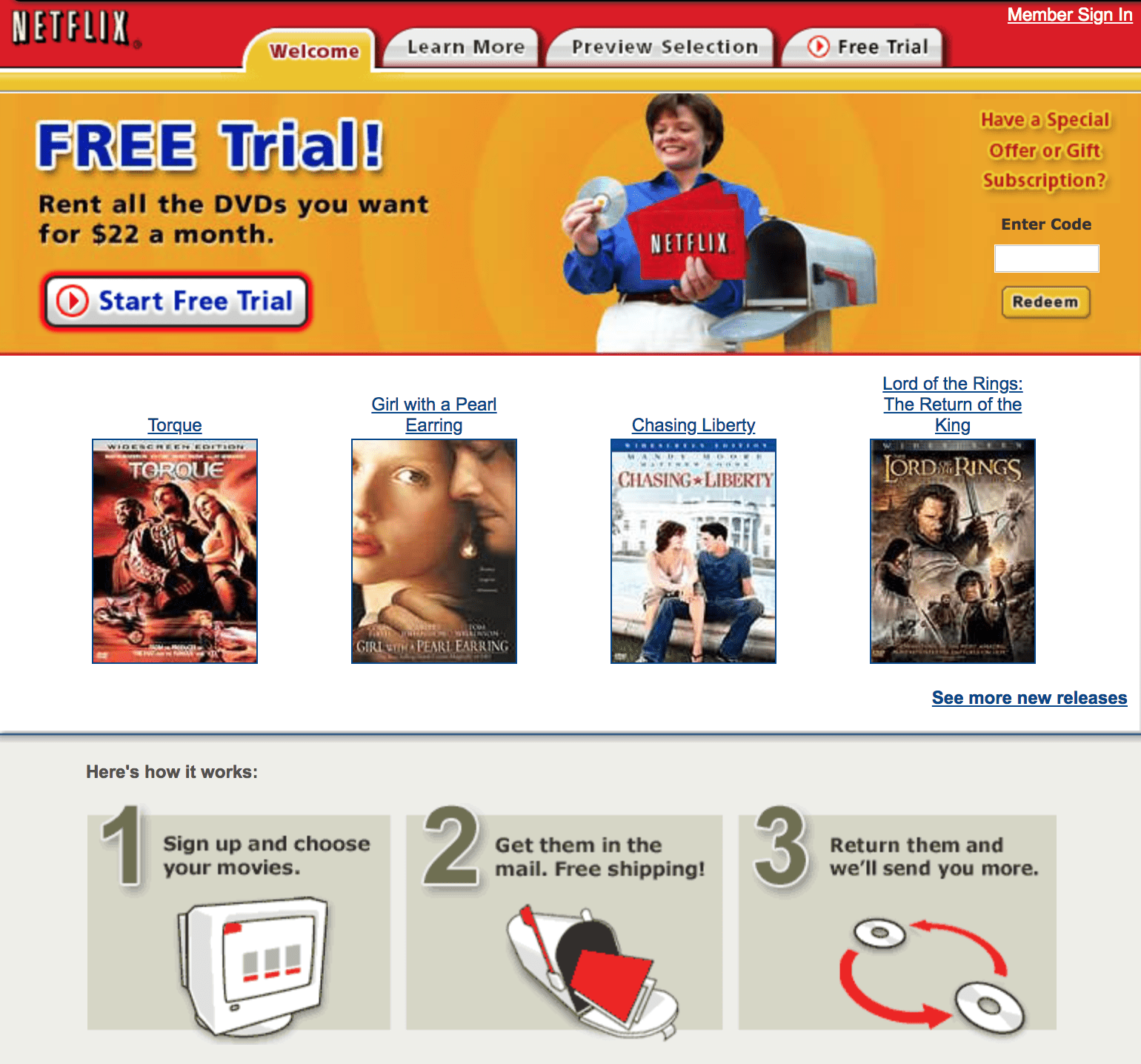 By 2005, the customer-base of Netflix had grown to 4.2 million and two years later, in 2007, the streaming service that we all know and love was introduced, where members could watch movies and TV shows instantly through their PCs or laptops.

Between 2008 and 2009, Netflix was partnering with a variety of companies offering consumer electronics in order to stream on the Xbox 360, Blue-ray disc players, TV set-top boxes and lately, on PS3 and other Internet-connected devices.

In 2010, Netflix was accessible on the iPhone, Nintendo Wii, iPod Touch, and iPad. Furthermore, the new subscription-based streaming giant expanded its market to Canada and a year later, to the Caribbean and Latin America. In 2012, the company was available in Ireland, the United Kingdom, and Scandinavia.

Netflix became the first internet network service nominated for the Primetime Emmy Award in 2013, receiving 31 nominations for comedy, drama, nonfiction, and documentary series. By the end of 2013, Netflix had more than 44 million subscribers, an increase of 33% from 2012.

The first original Netflix movie “Beasts of No Nation” was published in 2015. In the same year, the service was available in Italy, Spain, Portugal, Japan, New Zealand, and Australia.

By then, Netflix was unstoppable and only continued to grow, being the leader in the TV streaming industry. Netflix maintains its leadership to this day: 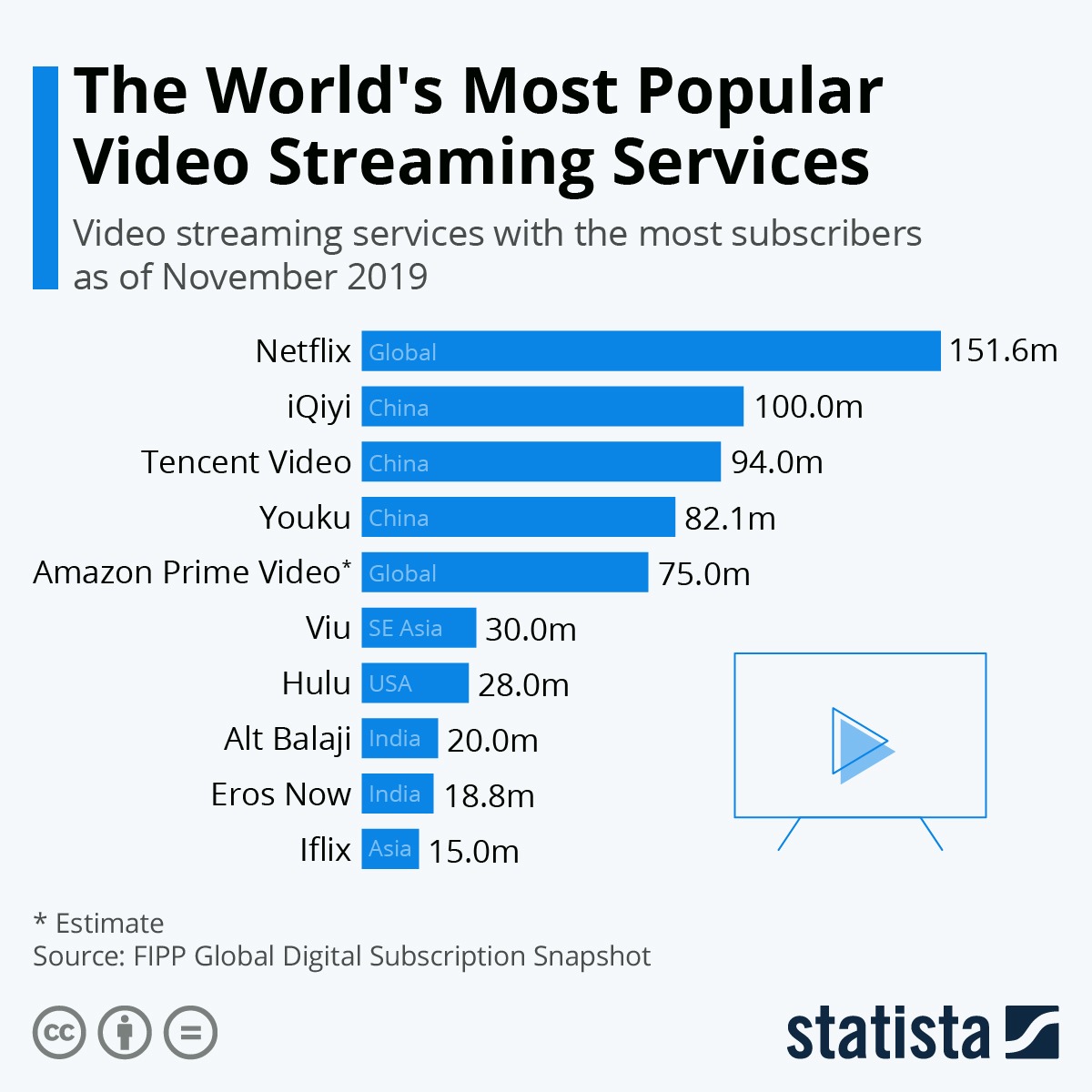 Netflix’ name is a combination between “Net” which is an abbreviation of the internet and “Flix” stand for flicks, which is jargon for movie and TV shows. According to Statista, the company is the leading internet television across the globe with over 167 million payment membership users as well as almost 4.6 million free trial customers.

The company’s sole revenue source is monthly membership fees, where the price varies based on the chosen subscription. Netflix provides its customers with three types of membership – Basic, Standard, and Premium. The only difference between the plans differ is the quality of the streaming service and a few other features like download options.

Netflix allows its potential customers to try the service for a one-month free so they can decide if their offerings suit a user’s needs. Thereafter, the price depends on customer location. For instance, in Denmark, the price is $12.37 while in Finland the price is $9.34.

One of the reasons why the platform is so successful among all generations is that you can watch anywhere, anytime and even without an internet connection. You can download whatever you want in your profile, and Netflix even has the option of smart download, which allows you to automatically download the next episode from your favorite series and delete the one you just finished. Users even have the ability to request movies or series directly to Netflix.

Many customers feel the struggle of choosing a movie or series, that’s where the streaming giant comes to the rescue with their recommendation system. Whenever a member enters the streaming service, the system suggests content you might be interested in. This recommendation system is driven by multiple factors like previous movie history, analyzing information about the watched shows, time of the day the user watches, the used devices, and duration of watching. With millions of people watching, this system is only getting better and better each day.

Netflix has been at the forefront of using public clouds (ec2, AWS) and NoSQL-based persistence solutions (think CAP Theorem). The Netflix Cloud Platform forms the layer of services, tools, frameworks, and technologies that run on top of ec2/AWS in order to help implement an efficient and nimble (fast-reacting), highly available, globally distributed, scalable and performant streaming solution of heavy files like video.

Similar to PayPal, Netflix has started to move more and more of its technology stack to NodeJS. Node allows developers to write the same code for both the front-end and back-end of a web application using JavaScript, and as Director of User Interface Engineering at Netflix puts it: “Node was a really attractive option for us because it aligned well with the skills of the UI engineers”.

In the early days, Netflix was built on Java, but as they migrated out of their own data center to the cloud, they moved to a more service-based architecture. Java still powers the backend of Netflix, but all the stuff that the user sees comes from Node. Node is built on an event-driven architecture, it is particularly well-suited for working with microservices at scale.

There is a lot of demand for UI work at Netflix. The company’s services reach a wide number of devices, including both web and mobile applications and applications for dedicated consoles. The front-end engineers were facing a lot of problems because they had to write a lot of Java code to produce the website, but they also had to write a lot of JavaScript on the client-side to keep up with ever-increasing front-end demands. Using Node, Netflix’s tech teams can do the majority, if not all, their work in JavaScript.

To get a full overview of the technologies, frameworks, and tools used to power Netflix’ services, here goes the full list of:

Originally established as a DVD rental company, Netflix changed the TV streaming industry, forever. Today, Netflix is a leader in the industry, providing its customers with an extensive library spread across 170 million active members worldwide. If you believe that you also have a brilliant concept for web or mobile app, don’t hesitate to reach us and let’s roll it together!

10 infamous tech flops that were way ahead of their time

This is Robots Everywhere — a show where we chronicle the slow but steady takeover ...