The Button Remote for Apple TV by Function 101 is a simple IR remote that brings physical controls to the Apple TV experience.

The Siri Remote that comes bundled with the Apple TV 4K is one of Apple’s more controversial products. It is flat, symmetrical, and finicky with its trackpad interface. The Button Remote by Function 101 hopes to solve these problems.

To understand why a product like the Button Remote exists, first look at the Siri Remote. Apple has attempted to create a minimalistic remote to control all interactions. There are plenty of features packed into this remote, but most users won’t know or care that they exist.

Many aspects of the Siri Remote center around special software functions or gaming. The trackpad doubles as a virtual joystick for games, the play/pause button a select button for simple controls. The remote itself has accelerometers, so the remote can be swung like a bat for a Nintendo Wii-like gaming experience.

On top of that there are gestures, edge-clicks, tap vs press functions, and Siri voice commands that make this remote control very complex. Users who want to watch TV are easily overwhelmed by the device, especially if they have cognitive skills or learning impairments. 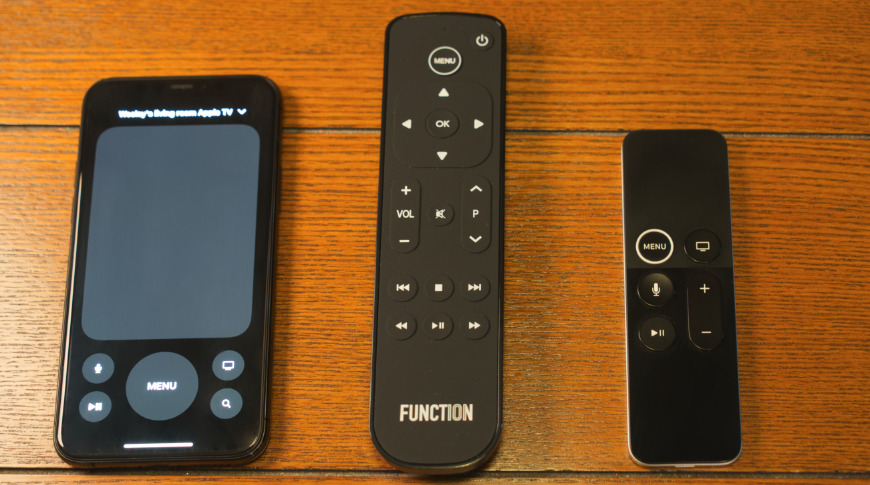 Each Apple TV remote has a unique function set

If the Siri Remote sounds like a nightmare and you want to turn on your TV and watch a movie at a reasonable volume, the Button Remote has you covered. As the name implies, there are plenty of buttons, 18 of them in fact, and they are all tactile and clicky.

This remote is instantly familiar to anyone who has ever used a TV before, thick black plastic casing with rubber buttons. The layout places navigation controls at the top, volume and auxiliary controls in the middle, and playback controls at the bottom.

The Button Remote comes programmed to for Samsung TVs out of the box. This means the power button and volume rocker will control your TV with no further setup. The setup instructions for TV and soundbar control can be found in the Function 101 FAQ page.

Unlike the Siri Remote, the Button Remote uses IR to communicate with the Apple TV, so it must have direct line-of-sight to control it. There must be line-of-sight for the TV and soundbar being handled by the remote as well.

There are a few functions missing from the Button Remote that some users are likely to notice. There is no “TV” button, which is used to return to the TV app, open the task switcher, and open the Control Center. Without that button you cannot switch users on the fly or access tvOS 14 features like HomeKit cameras.

Siri is absent as well, meaning text entry is laborious and there is no access to any Siri functions across the system. Users who are replacing their Siri Remote entirely may have to fall back to their iPhone Remote app or the Siri Remote to perform some tasks. This shouldn’t be an issue for users who do not access more advanced functionality.

All of the Apple TV specific buttons work without any programming, so even if you move between rooms and Apple TV boxes, the remote will always work. The programming for volume and power will have to change if you use different TV brands, though. 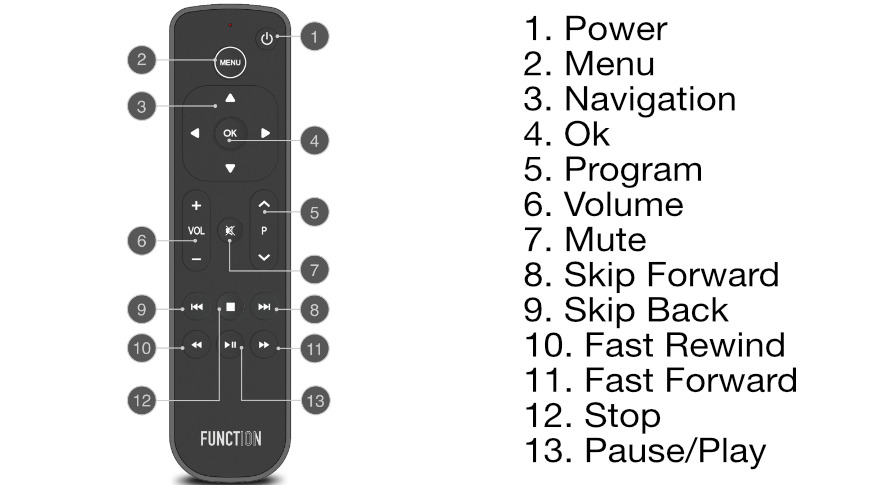 The features the Button Remote lacks are the primary purpose of the device. Not only is the device cheaper for these missing technologies, its much more straightforward for the user.

Only one significant anomaly exists for the Button Remote; the Program rocker. It serves no purpose, though the manufacturer says that a list of compatible apps will be added to the website FAQ in the future. The “P” rocker is available for apps to use as an additional input. Think cable providers being able to change channels with it inside the Apple TV app. Otherwise, it is only used when programming the remote for different TVs, which is strange given its placement.

Should you buy the Button Remote?

Do not buy if the idea of losing Siri or Control Center functionality is a total turn off. Those with complex HomeKit or AirPlay setups will sorely miss the Siri Remote. Though, these functions can be reached within the TV Remote app on iPhone and iPad.

The Button Remote by Function 101 is a budget-conscious alternative to the Siri Remote and is perfect for those seeking simplicity or accessibility friendly ergonomics.

Buy the dip in AAPL ahead of ‘iPhone 12’ launch, says Morgan Stanley

Apple has updated its suite of iWork apps to include new features introduced in iOS ...