SteelSeries new Nimbus+ is the ideal iPhone game controller, designed from the ground up for all of Apple’s platforms with several Apple-specific features including a Home button, an iPhone mount, and a Lightning port.

The SteelSeries Nimbus+ has been refined and improved over its competition and previous versions of the Nimbus line. It operates over Bluetooth, bringing physical controls and tactility to Apple gaming.

Whether you want to kick back on your Mac, your iPhone, your iPad, or your Apple TV the SteelSeries Nimbus+ has you covered.

On the face of the controller, there is an eight-way directional pad, a home button that is flanked by an options button to the left and a menu button to the right, followed by A, B, X, and Y buttons. All of those sit above a set of analog joysticks. 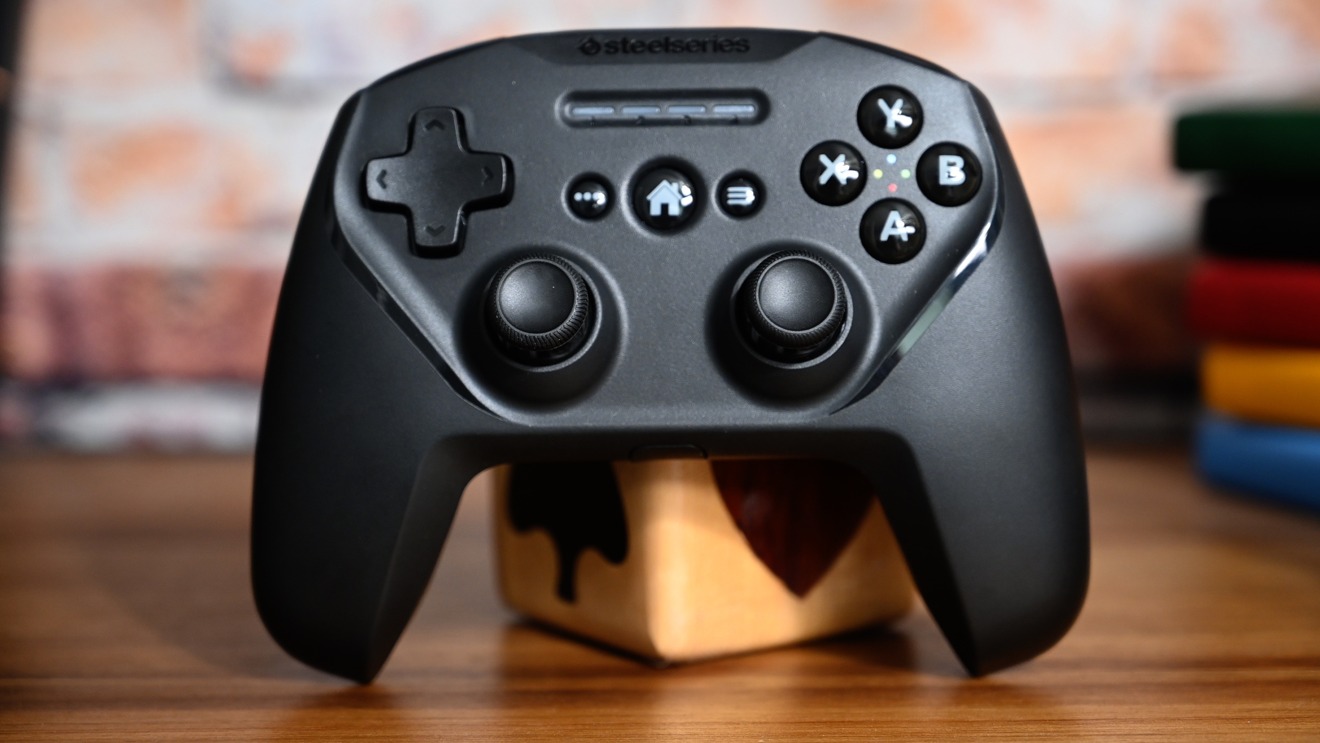 Face of the SteelSeries Nimbus+

These joysticks were upgraded since the previous Nimbus, now including support for L3 and R3 depressions. L3 and R3 support was added as part of iOS 12.1 so previous iOS controllers didn’t bother including these extra buttons.

A quartet of LED is also on the face, which acts as a status light, a player number, and the battery life. If one bar is lit, it has less than 25 percent battery health. Two represent 25-50 percent battery, three is 50-75 percent, and four is 75-100 percent. When not showing battery life, it also flashes when it is in pairing mode but otherwise illuminates the player number you are when multiple controllers are connected to the same device. 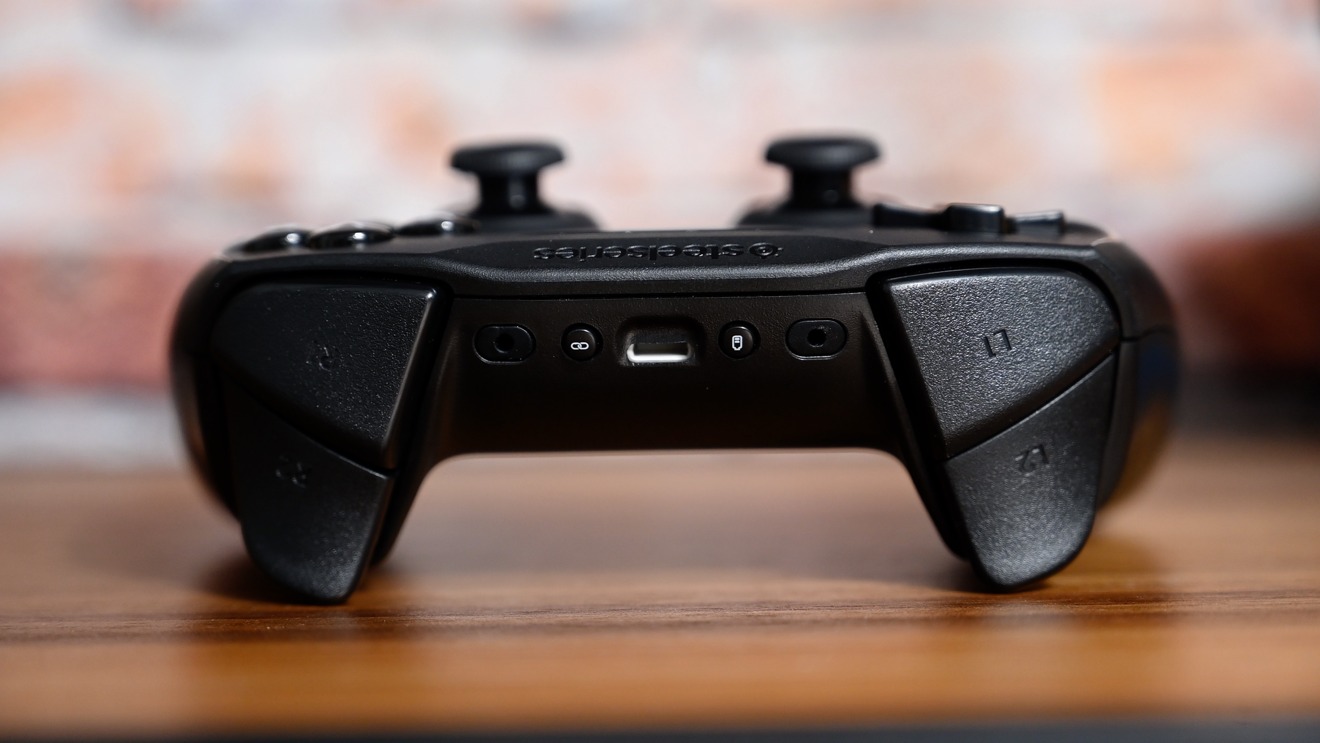 Front of the SteelSeries Nimbus+

The front of the controller has two holes on either side for the phone mount, a wireless pairing button when switching devices, a button to show battery life on the screen we mentioned above, and a charging port.

For the Nimbus+, SteelSeries abandoned the AA batteries and chose to go the Lightning route. This is great for mobile users because it now has an amazing 50-hour battery life as well as the ability to charge over Lightning. This means you don’t have to take a separate charging cord just for your controller. You can travel solely with Lightning. 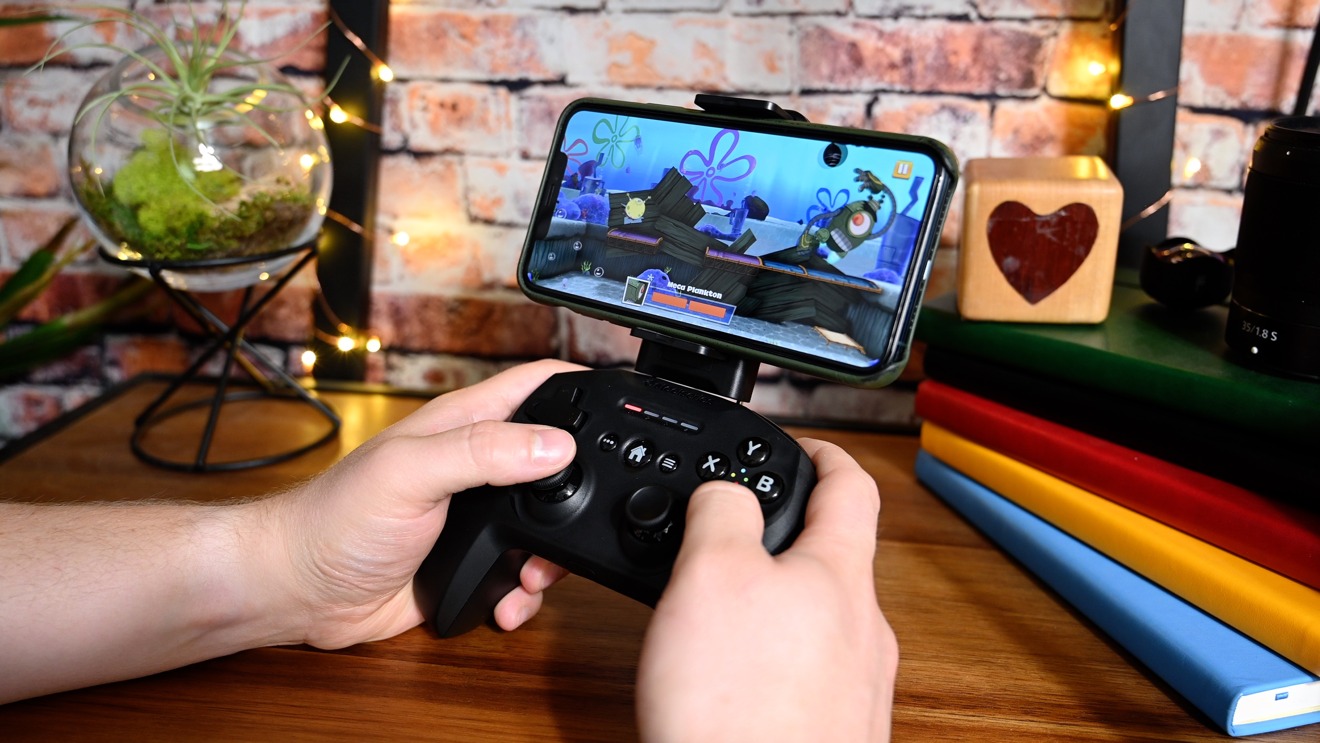 Then we have the L1/L2 and R1/R2 triggers. These triggers are now Hall effect triggers which are much smoother and consistent in their pressure as they are pulled. This is very noticable and a welcomed change.

We’ve been fans of the SteelSeries controllers for a while, oft recommending them to users. But the lack of L3 and R3 made the previous Nimbus not ideal.

But SteelSeries didn’t just add the new depressable joysticks and call it a day. This upgraded version has a redesigned d-pad that looks cleaner, dropped the bright colors from the character buttons on the right side, improved the ergonomics on the controller, upgraded the triggers to use the Hall effect rather than just springs, included a phone mount, increased the battery life, and added new buttons to the face. 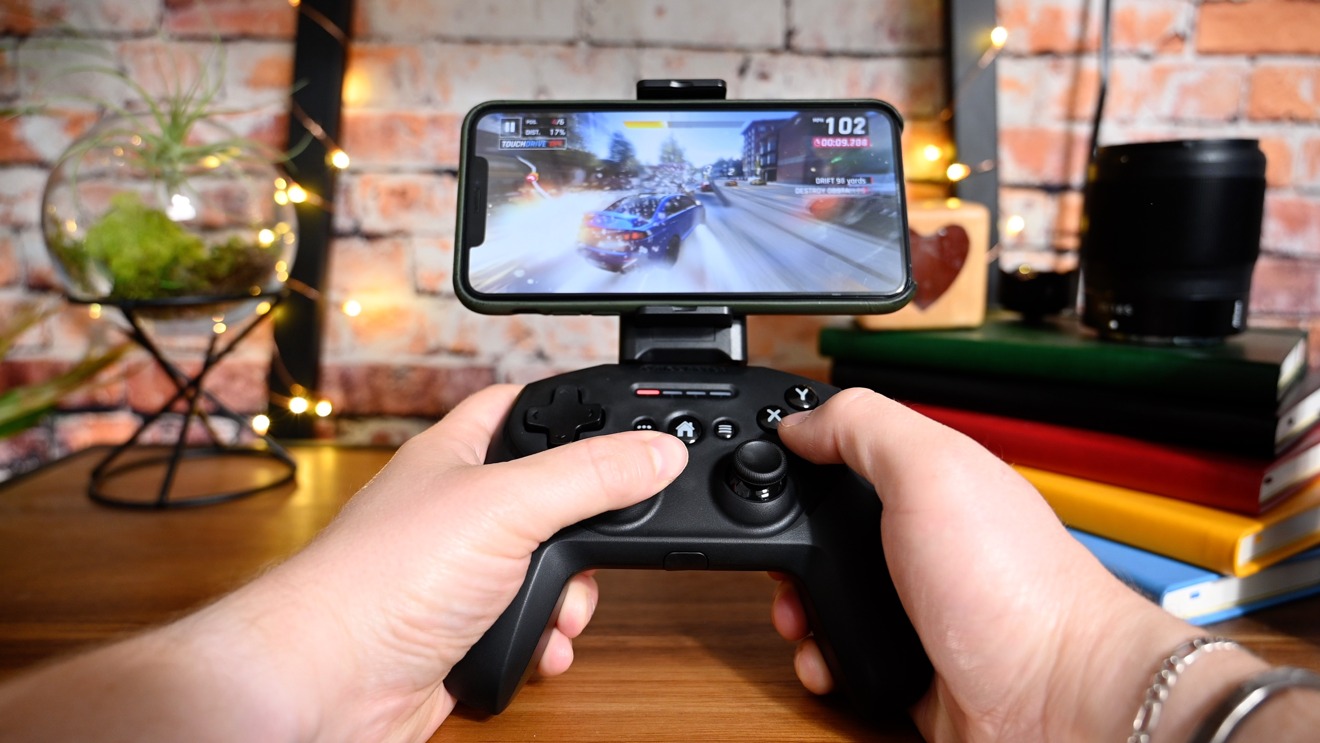 Racing with the SteelSeries Nimbus+

This is now a controller worthy of the Apple ecosystem taking advantage of all the MFi controller specs available.

With Apple Arcade continuing to release new titles each week and iOS and tvOS gaming at an all-time high, this controller comes at the perfect time.

Should you buy the SteelSeries Nimbus+

In SteelSeries lineup, they also offer the Stratus Duo. It offers a very similar design to the Nimbus+ but there are several differences between the two. The Stratus Duo only sports a 20-hour battery life compared to 50 on the Nimbus+. It also sells the phone grip as an add-on rather than bundled.

These help make up for the higher price tag found on the Nimbus+. Not to mention Apple’s MFi licensing fees for a controller and the Lightning port.

So while the controller is a $20 premium than the other SteelSeries controllers, we find the price justified.

Looking even solely at the Apple controller market, this is by far the best option out there, especially for iPhone. The controller is designed to work across Mac, iPad, iPhone, and Apple TV. It has physical buttons tied to Apple features such as the Home button for when on Apple TV. And a Lightning port so you don’t need to bring a different cable.

The other prominent choices for Apple users would be the Sony PS4 DualShock 4 or the Xbox One controllers but these weren’t designed first and foremost with Apple devices in mind. They work, and they work great, but SteelSeries developed this controller exclusively for these devices and it shows.

Review: Eve Cam protects your home and your privacy

Following two developer betas for its milestone operating systems, Apple on Thursday has moved on ...